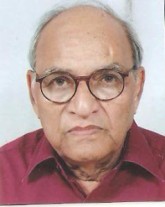 Shri Dubey , born on 7th October,1931, was orphaned while in his early teens and had to struggle hard to bring up his three younger siblings and to educate them and himself. He started by vending newspapers and eventually became a journalist himself.

He worked at the same time amongst students and youth, textile workers of Kanpur and poor peasants and agricultural workers. He took part in the 1942 Quit India Movement and the 1946 anti-British rebellion of the Royal Indian Navy and release of Azad Hind Fauj prisoners. He edited a 1100-page, 2 million word first ever micropaedia. His other is a well researched and interesting 125-page Hindi primer on all religions practised in India.

He has had various stints in a number of print media organisations such as T.O.I, Dainik Jagran as well as NDTV and Discovery channel in the electronic media.