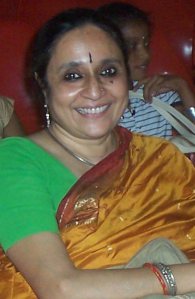 Delhi based freelance Educationist who is interested in merging the Indian visual and performing arts into mainstream education. Parents were both Professors in Delhi University. Madhavi  has worked closely with CIET,NCERTand IGNOU on a number of education related projects She has been writing and presenting programs on All India Radio’s General Overseas Division for over two decades . She has also worked as Consultant for DAV schools for Early Childhood Care and Education Program since April 2011 and as  Program Coordinator, Youth Wing, Jagori from May 2009 to January 2010. She has also worked as Program Coordinator – Research and Documentation, Kathalaya, Bangalore Project in Karanjia, Orissa from September 2008 to April 2009 with the Santhali tribe to explore their rich oral tradition of folk lore. Involved in audio-video documentation of stories, songs, developing story kits for facilitators, designing and creating Manual for teachers and Report writing. She was also engaged as  Coordinator, from February 11th, 2008 to April, 2008  for Poster Women Project ,under aegis of Zubaan ,New Delhi .
Contact number : 09811775560