Anuj Kumar has been a student of Saksham and lives in Noida. He is sixteen years old and has passed his Secondary school examinations this year (2015) scoring 76%.

He is now enrolled in the same Government school for the Senior Seondary.

Anuj seen with his brother Santosh, during a Saksham-sponsored trip to Kerala.

Anuj’s family migrated to the city several years ago. His father is engaged in making iron grills and gates and both Anuj and his brother Santosh help their father in their spare time and even supervises the work of the helpers when their father goes to the village. His talent was recognized by the teachers of Saksham during the drawing sessions held at school.

A quiet and unassuming boy, he would be lost in his work and a satisfied shy smile would hover on his lips when he had finished his work. 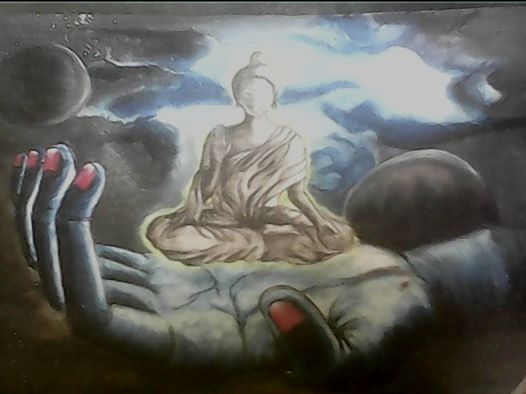 He was given as much encouragement as the circumstances made possible, for the school has no Art teacher who could have guided him in his technique.

Anuj’s imagination, however, needs no tutor. He really loves to paint and his own motivation has largely nurtured his art.

At Saksham, we have tried to give him all possible opportunities to participate in drawing competitions and explore his talent.

He has won several prizes. Financial circumstances of his family do not allow him to fully explore his talent. But Anuj is undeterred.

The high point for him in this regard was when one of his paintings was chosen by Mehac Foundation, an NGO engaged in the area of Mental Health, for the exhibition that was held in the India International Centre, New Delhi as a part of their fund-raising efforts.

Anuj’s painting found space on the wall along with other very reputed and established artists. The painting was also sold. and Anuj got part of the proceeds.

We wish him all success in his endevours. Do visit his Facebook profile page – Anuj Kumar