Gift of life-Pooja’s tryst with destiny

This is one of those stories that Saksham is always going to  talk about because  it  emphasises  the most unexpected ways that a little bit of reaching out  may sometimes  lead to events unfolding to change the course of lives.

Pooja  lived  in a ramshackle tent like dwelling on the roadside, in Nithari village , Noida. Her parents eked out a living selling tea, cooked rice, rotis and vegetables to rikshaw pullers and other small time workers, who stopped  by for a meal. 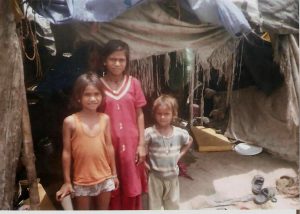 Pooja started coming to Saksham along  with her siblings.  She was a sickly looking girl of eleven, thin and easily tired and a very slow learner. She kept absenting herself from the school often.

It was only when the teachers at Saksham enquired about her frequent absence  that it was learnt that Pooja was suffering from a congenital heart condition. Her mother, a hard working woman with four other kids, all younger to Pooja, had been concerned about her daughter’s bouts of breathlessness and fainting spells, which was becoming more pronounced as she was growing up. At the behest of a local practioner she had taken her daughter to All India Institute of Medical Sciences, New Delhi, where her condition had been diagonised and surgery recommended.

Pooja had a hole in the ventricular septum as also a small obstruction in her pulmonary artery. Her  mother was told that the operation would cost around sixty thousand rupees. Since then, the reports had been lying in a corner of the tent, in a soiled polythene packet. For the family, six thousand itself would have been a considerable sum to get together; sixty thousand was too huge to think of. So Pooja walked about listless and short of breath, unable to run about or play with other children or even walk for a while without having to stop and rest.

A bunch of youngsters got involved with Saksham for a while. They belonged to one of the Youth wings of the Rotary Association of Delhi. With them, came Mr. A.C. Peter, an Assistant Governor of the Rotary Club, on a visit to Saksham. The conversation led from one to another and the topic of Pooja’s illness came up.

That was when Mr. Peter mentioned about the Gift of Life programme of the Rotary. Under this scheme, Rotary has been sponsoring heart operations of children , who belong to families who cannot bear the costs of such surgeries. Pooja’s case was referred to Dr. Nischal Pandey, who was then working with Max Hospital , New Delhi and was in charge of the Gift of Life Programme, in Delhi .

Not long afterwards, in late 2006, Dr. Pandey made all arrangements for  Pooja’s surgery which was conducted  by a team of doctors in Fortis Hospital, in Vasant Kunj Delhi, one of the most prestigious hospitals in Delhi,  with the best of post operative care.

Pooja after her surgery with the nurses who attended on her and Dr. Nischal Pandey.

Her condition being still delicate , it was not desirable that she spend her post-operative days on the roadside shack. One of the classrooms had been reorganised to allow her mother to take care of her in the school premises, till she was well enough.

Pooja did continue to attend classes at the school for sometime. The surgery did wonders to her health which picked up steadily. She put on weight  and in no time she was a blooming teenager. When the doctors first examined her, they had indicated that without the surgery her health would steadily decline  and in another five years time, matters would become very critical.  Now she was bubbling with health.

Her mother had other fears haunting her now, of unwarranted male attentions being directed towards her daughter , living on the wayside as they were. She was desperately looking for a boy to marry her off and before she was even sixteen, she became a bride and a mother not long afterwards.

Pooja visited the school with the newborn baby in her arms, beaming happily.

Wherever she is now, Saksham wishes her all happiness.